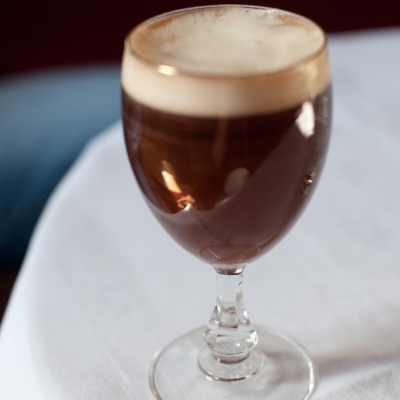 Legend has it that the Irish Coffee was created in the winter of 1943 by Joe Sheridan, a chef at Foynes Port near Limerick, Ireland. The village of Foynes was an airbase for transatlantic flights at the time, often being the landing spot of many prominent figures and celebrities, normally as a layover and refuel spot for longer flights. Passengers would often need to spend the night in Foynes and a hub of new accommodation, bars, and restaurants was created to service the travelers.

One day, after a plane abandoned its trip and turned back to Foynes, Joe whipped up something to help the passengers forget about the cold and their disappointment. Legend has it that everyone drank their drinks in total silence, savoring the unique taste as it passed through their lips. One person eventually spoke up, asking Joe if they were drinking Brazilian coffee, to which he heartily replied “No, that’s Irish Coffee.”

Irish Coffee became a huge success and an airport specialty. Irish Coffee was introduced to the United States in 1952 by travel writer Stanton Delaplane. He brought it to the attention of Jack Koeppler, a bartender at the Buena Vista Hotel in San Francisco, and persuaded him to recreate it.