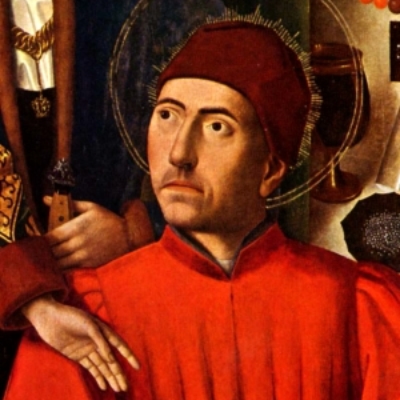 He has become the traditional patron of all smiths, metal workers, and craftsmen.

Son of Eucherius and Terrigia. Extremely skillful metalsmith. Apprenticed to the master of the mint at Limoges, France. Treasurer at Marseilles, France. Master of the mint under King Clotaire II in Paris, France; a close friend of and advisor to Clotaire. Noted for his piety, hard work and honesty, Eligius was generous to the poor, ransomed slaves (including Saint Tillo of Solignac), built churches, a monastery at Solignac, France, and a major convent in Paris. It was said that you could easily find his house by the number of poor people there that he was caring for. Counselor to and diplomat for King Dagobert I. Friend of Saint Ouen of Rouen with whom he formed a small religious society. Persuaded Breton King Judicael to accept the authority of Dagobert.

Ordained in 640. Bishop of Noyon, France and Tournai, Belgium in 641. Built the basilica of Saint Paul. Preacher in Antwerp, Ghent, and Courtai in Belgium, with many converts, generally brought to the faith by his example of charity and work with the poor and sick. Friend and spiritual teacher of Saint Godeberta. Encouraged devotion to the saints and reverence for their relics; he discovered the relics of Saint Quentin, Saint Piaton, and Saint Lucian of Beauvais, and made many reliquaries himself. Miracle worker with the gifts of clairvoyance and prophecy; he foresaw the date of his own death.

His patronage of horses and the people who work with them stems first from his patronage of smiths and craftmen, but also from his having left a horse to a priest at his death. The new bishop liked the horse, and took it from the priest. The horse became sick, but recovered immediately when it was returned to the priest that Eligius had chosen. There is also a legend of Eligius removing a horse’s leg in order to easy shoe it, then putting the leg back in place.