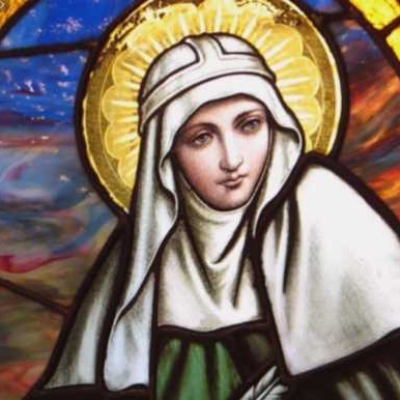 St. Brigid is a Patron Saint of Blacksmiths.

Imbolc or Imbolg, also called Saint Brigid’s Day, is a Gaelic traditional festival. It marks the beginning of spring, and for Christians it is the feast day of Saint Brigid, Ireland’s patroness saint. It is held on 1 February, which is about halfway between the winter solstice and the spring equinox. Historically, its traditions were widely observed throughout Ireland, Scotland and the Isle of Man. It is one of the four Gaelic seasonal festivals, along with: Bealtaine, Lughnasadh and Samhain.

Imbolc is mentioned in early Irish literature, and there is evidence suggesting it was also an important date in ancient times. It is believed that Imbolc was originally a pagan festival associated with the goddess Brigid, and that it was Christianized as the feast day of Saint Brigid, who could be a Christianization of the goddess. The festivities on the feast of Saint Brigid did not begin to be recorded in detail until the early modern era. In recent centuries it was marked by the making of Brigid’s crosses and a doll-like figure of Brigid would be paraded from house-to-house by girls, sometimes accompanied by ‘strawboys’. Brigid was said to visit one’s home on the eve of the festival. To receive her blessings, people would make a bed for Brigid and leave her food and drink, and items of clothing would be left outside for her to bless. Brigid was also evoked to protect homes and livestock. Special feasts were had, holy wells were visited, and it was a time for divination.

Although many of its customs died out in the 20th century, it is still observed by Christians as a religious holiday and by some non-Christians as a cultural one, and its customs have been revived in some places. Since the latter 20th century, Celtic neopagans and Wiccans have observed Imbolc as a religious holiday. From 2023, “Imbolc/St Brigid’s Day” will be an annual public holiday in the Republic of Ireland.